A depth index type (either Depth, TVD or TVD_Datum) is assigned to each dataset inside Well Log Viewer.

The depth index type of a datset is determined during data loading as follows:

Log data that is stored in LAS files will mostly be of type "Depth", however, it can also be in TVD and there will no indications inside the LAS, other than perhaps the file name, that it is a TVD indexed dataset. If a LAS file contains TVD data, but the depth curve name does not start with "TVD", it is useful to manually edit the LAS file to change the name of the depth curve so that it starts with the characters "TVD", then it will be loaded with the correct depth index type.

Once the data is in Well Log Viewer and has a correct depth index type assigned, it will be maintained correctly through subsequent processings.

8.2  Switching between TVD and TVD_Datum

The difference in the depth value between types TVD and TVD_Datum is the value of the parameter APD (Above Permanent Datum). The APD parameter can be updated in the Wellsite data editor. 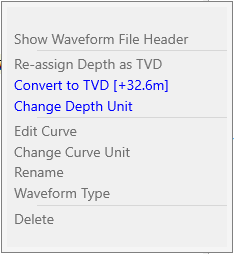 TVD depth conversion is available in the Log Processing menu.

Some guidelines on how to use the options in the Processing Menu are given in the next section.

Two options for TVD computation are:

A pre-requisite step for computing the Northings and Eastings (option #1 above), is to go to the Wellsite Data Editor and confirm the UTM values and "Log datum above PDAT" (APD), since the same values are used for TVD conversion. Editing the Wellsite Data is discussed earlier in section 5. Although not displayed in the Wellsite data editor, the Grid Convergance angle is also computed during the UTM computation, and stored internally with the UTM values.

Converting logs from a Measured Depth index to a TVD depth index is a two step process.

The first step is to take a series of Deviation and Azimuth measurements which may be sampled sparsely and irregularly along along the wellbore trajectory and compute a TVD value at each of these Deviation/Azimuth depth measurements.

If the TVD channel already exists in the loaded deviaton survey data and it is correctly referenced to the logging datum, then this step can be skipped, and you can proceed to step-2 below.

If the Northing/Easting Well Coordinates are left blank or are zero, then the UTM well coordinates will not be computed and only the TVD and NS and EW offsets from the wellhead are computed.

There are two conversion options:

The first conversion option is the default option, which will produce a variable sample rate data-set. If at some time later, a constant sample-rate dataset is required, then the "Resample Dataset" process can be applied.

There may be occassions when the original MD indexed logs are no longer available, and it is desired to re-produce these.

This process is available, and the deviation survey with a TVD channel that is computed in Step-1 above is required. This deviation survey should be referenced to MD depth, as it was in step-1. The log channels for conversion back to MD will referenced in TVD depth.

As discussed above, if the original MD->TVD conversion used the same output sample rate as the input logs, then some resolution will have been lost. This lost resolution cannot be reclaimed when converting back to MD. Although when doing  theTVD->MD conversion, the output data is re-sampled to give the same sample rate, but the resolution has already been lost.

If, however, the original MD->TVD conversion was done to retain the resolution (which would have resulted in a variable sample rate dataset with a finer spaced sample than the input data), then converting this dataset back to MD will faithfully re-produce the original MD input logs without any loss of resolution.